She caught sight of me before I her but I wish that it had happened the other way. I wish my camera was ready to greet her framed within a tunnel of scaffolding against a brownstone building at the far end of the street. I wished I could retrieve now an image of that brief moment when the fractured light tumbled over her body as she advanced towards me through the softening evening- the purposefulness of her walk cutting through the electricity of the city streets. There was a grand composition about that moment and it meet me unprepared. The most I had time to do was fidget with the strap of my bag and search for the words to greet one of the most beautiful women that I have encountered. Read La Shaun’s Dance of Faith.

Finding the words was not hard. La Shaun provided all of them. With a tremendous smile and a burrowing hug she greeted me instead of I her. This little dancer with the makings of becoming a Caribbean icon greeted me with an enthusiasm and care undeserved of both my station and the nature of our meeting. But this was the La Shaun that I remembered; with the charity of a smile worthy of the most beloved. As an awkward boy it is the kind of smile from a girl that shows you all that you need to know about the beauty of a woman.

Six floors above the din of Atlantic Avenue in Brooklyn we were meeting under very different circumstances. She was at the end of a successful graduate programmme at NYU Tish and me at the beginning of an unexpected relationship with New York. La Shaun had spent most of the last decade in the spotlight of Trinidad’s popular culture, touring globally with the widely popular Soca artiste Machel Montano as one of his back up dancers and the lead chorographer of his stage performances. With justifiable reason she is regarded as the standard bearer of the Soca dance genre and one of the contemporary leaders in Trinidadian dance: A dynamic figure on stage she leaps, twists, rocks and throws her body into the high energy character of the music with remarkable fluidity.

La Shaun sat and folded herself into a large wooden rocking chair as I fumbled with my equipment. She waited patiently but not humorlessly. There were smiles and questions and suggestions from the little dancer. “Can we take a photo by the bookshelf?” She asked at one point. “I just love how these books make me feel” she explained. At another moment she asked for a shot by the window to capture “the beauty of the city”. I was enamored with her for this. It was almost as if there was no real care for herself to be in these images but more so the environment from which she found inspiration over the past several months. There was gratitude as she spoke about her period of study and an underlying sense of awareness. Though there was a consistent playfulness in her voice there was also deep deliberation; a penetratingness noticed in the control of her glances and her pauses between thoughts.

I had not gone to photograph her as much as I had gone to find out the factors that helped her to survive as dancer. Two weeks earlier in Trinidad I sat at a dinner table with a young girl who wanted dance to be her life. I had no insights to offer her beyond the knowledge that to be an artist took courage and that the assessment of success in our careers had to be judged with different measurements than other lives. There would be no straight lines and few guarantees. I told her about La Shaun and the example she might have offered but I did not truly know what to say to a young girl from Trinidad who had fallen in love with dance and wanted it to be her life’s work. Two weeks later I was in Brooklyn and La Shaun was consenting to a request to share her story with me in her own words. 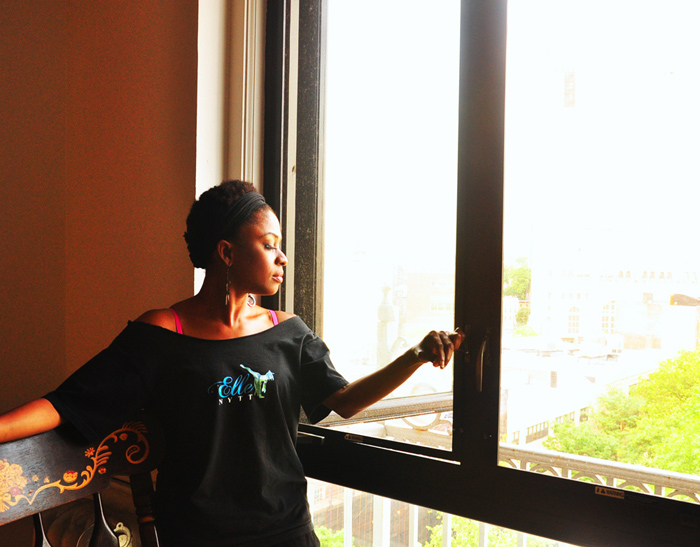 I have an image in my mind of La Shaun rocking back and forth with her feet folded into an antique rocking chair talking about her life in dance. At one point she cries when she reflects on her journey and at another her arms are punching the air as she recalls the moments that filled her with joy. Throughout, there is the back and forth of the old chair and la Shaun’s playful voice. I imagine that it was an emotional time for her. She was leaving a city she loved and closing the chapter on a moment in her life that seemed to have a profound impact on her. She alluded to the richness of her experience of studying in New York but I took with me the impression that her references only loosely marked the shape of her awakening.

There was earnestness to the things she said or at least I believed her. She talked openly about her family’s support being one of the biggest assets in her career, the trepidation she felt giving up a stable job to follow dance and the emotional cost of choosing to study. She was open about the role dance had played in the balance of her life and the impact of the moments that demonstrated to her that somewhere along the line her life of dance had lived beyond the stage and made real human contact. On that day it was a High school in Brooklyn she visited for which she was asked to be the Keynote speaker by the graduating class. She struggled as she tried to put into words what that made her feel. The things she did not say said more: the forceful inhalations between her search for articulation and the exasperated sighs when the words failed to convey the full meaning for her.

Before long the interview was over and she encouraged me to see the city from the roof of her building. From the roof-top the statue of liberty whispered in the distance over the Hudson River whilst the Barclay Centre stood loudly a few kilometers away in another direction. The evening air was chilled, vibrant and mixed with the muffled musicality of the streets below-impatient horns and the frequent run of sirens blended into the low hum of the dusking city. The charm of the space was inescapable and observing La Shaun within its frame she seemed to embody all of it. It was breathtaking. I asked to get a few more photos of her against this backdrop and she acquiesced with patience and playfulness. With ease she extended her legs on to the ledge of the building fitting herself against the railing of a 90degree corner: Lost in the atmosphere of the moment I had, before then, forgotten that I was with a professional dancer. 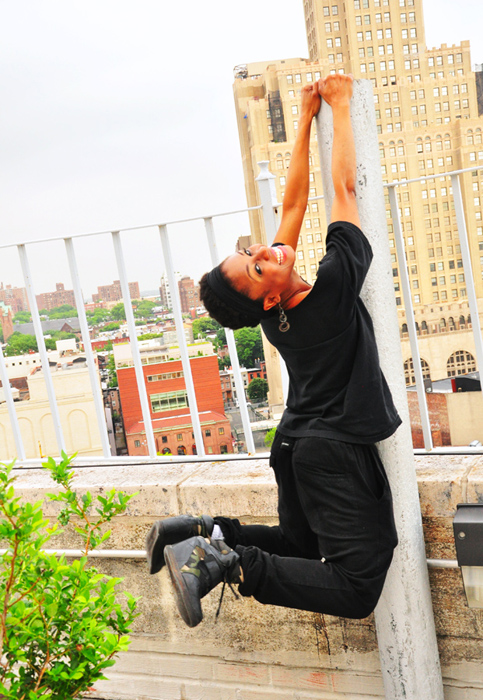 On the roof top she drew my attention to a trough of yellow and red flowers and asked “Can we take a photo here? I adore these flowers”. For me such moments peer away the surface layers of a persona and provide evidence of what lies beneath. The small things one observes holds meaning. The little things in which one finds fascination reveals one’s internal relationship with one’s environment. Later it would be a red wall inside of the Mark Morris Dance Center and out onto the streets it would be the decorative stone work of the buildings and the yellow taxi cabs. With La Shaun there seemed to be sincere awe in characteristics, no matter how nuanced, that introduced the colours of difference to life. It is refreshing to think that this is how she sees the world.

There is one photograph retrieved from the end of the evening that for me captures many sentiments about La Shaun. The diminished day had rapidly transitioned into the formation of nightfall and we were summing up our farewells when within a few steps she stood at the top of Atlantic Avenue with the full linear perspective of the avenue running away towards the distance. The moment seemed to open wide and La Shaun was at the center of it. I begged her to stop whilst switching to my 50mm lens. I then opened the aperture to its widest with the hope of compensating for the low light entirely forgetting that the background would “bokeh” when she became the focus. The end result is an emotive image that has LaShaun standing in the seemimg vastness of a city encircled by orbs of soft lights and high colour. She appears as though she stands at the center of something mystical; aware of all of the magic around her… to be truthful…she appears to be the center pulse of that magic. I find it difficult now to see La Shaun otherwise. 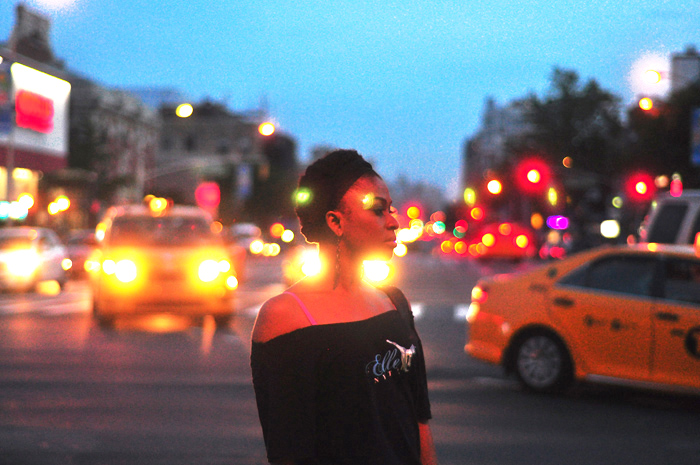 Since that evening I have had the opportunity to catch glimpses of La Shaun and measure her against all that she said. I have seen with my own eyes a woman who pulls everyone she meets into her physical embrace disarming their guards with the words “I like hugs”. I have seen her spontaneously breaking into dance on a crowded subway platform with the same easiness she had when it was just she and I in large empty room and I have had the honour of seeing her return to Trinidad and immediately be about the business of touching lives through her dance. 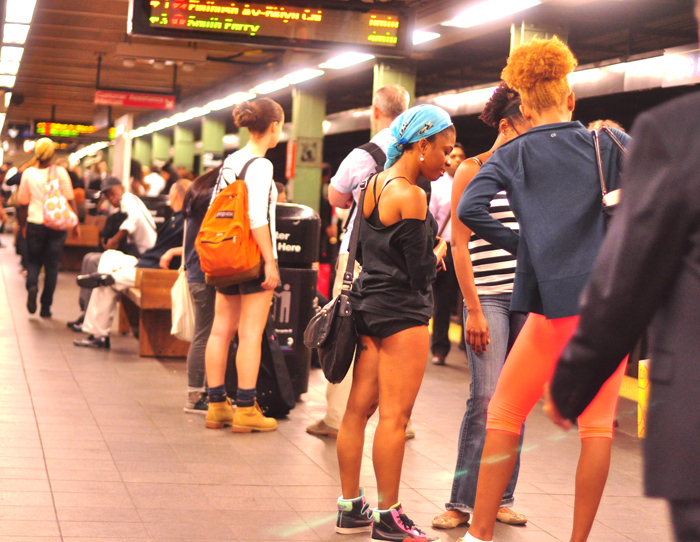 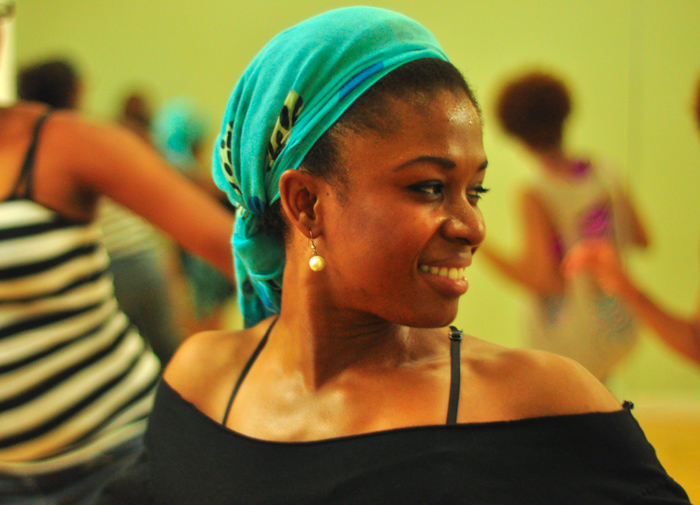 I walked away from my encounter with LaShaun with an enlivened adoration of the woman and I have found presumptuous approval in that understanding.  She should be loved and not just by a few but by many.