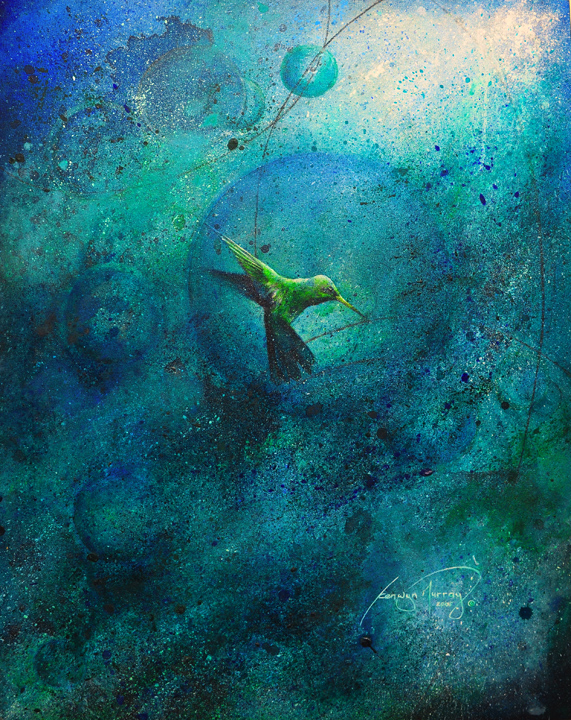 A malignant cancer is a horrific odyssey that can reduce its voyager to a frail steward of consciousness. The reduction is unkind and the movement of strength away from the body and mind a painful one. It is like the suctioning of all that is lush and green and hopeful from a person; a slow extraction of breath from a burdened traveler. It takes courage and when that is exhausted it takes more courage.

The painting was never meant to be seen by anyone much less to be sold and put on display. It was my tribute to her; my process of coming to terms with the idea of her passing or perhaps more honestly the idea of what her passing meant to me. There is no real philosophical center to be found in the wake of losing someone you’ve loved so dearly. There are tears and there are questions. There is disbelief, doubt and confusion. There are the things you are committed to believe but in the midst of it there is still the chaos and guilt of not being able to be stronger and rooted in your faith. In the midst of it there is emptiness.

It is difficult not to reach out into the universe looking for a sign; searching for direction out of areas of confusion and uncertainty in your mind. It is not difficult to seek avatars that represent for us guidance- confirmation of the significance of our lives and the promise of it. It is perhaps one of the most natural things to us. If you have ever had the opportunity to experience a hummingbird suddenly interrupt your consciousness-dancing, flickering, hovering and reflecting the sun-then it might be easier for you not to believe me misguided when I tell you that such an image is what brought real and tangible courage for me when I felt the void of her most in my life. It did not help my commitment to sober thought when my sightings of them were always preceded by dreams of her nor did I turn to reason when I began to notice that one always caught my eye after I genuflected genuinely for guidance. Real or imagined those were the coincidences I embraced and real or imagined it is the little encounters with nature in this way that can turn a mind towards healing and transformation.

To be fair to considerations of rationality my thoughts were hardly unbiased by the time I contemplated the image of the hummingbird within ideas of the spirit and an enduring consciousness. There is a known link between the hummingbird and the human spirit that existed long before I explored the image in my own life. At the beginning I knew of the legend of the Pitch Lake in Trinidad and the Amerindian’s respect for the little bird as the reincarnation of the departed. What I came to learn however, as I researched further, was of the documented and widespread adoption of the hummingbird by the native peoples of the Americas as a symbol of resurrection, beauty, strength, courage and the persisting soul. This is the currency of the hummingbird as a narrative tool: That something so small and seemingly insignificant can exist as its own and simultaneously reflect all of nature. Its uniqueness, its unbounded freedom of flight and its evanescence has made it, for the peoples of the new world, a symbol of hope. 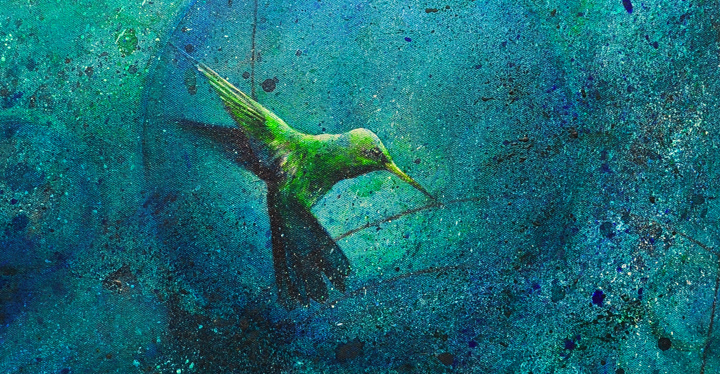 In this painting the hummingbird represents the individual soul in purposeful motion, through the turbulence and chaos of life, towards rebirth. There was a deliberate attempt to locate the focal image in a layered, textured and abstracted environment; one that alluded to the ephemerality of space and matter as well as one that suggested ideas of spirituality and the unseen forces of nature-influences that have the ability to push or pull us toward a multiplicity of destinies. The desire was for all of this to be represented without the loss of the central image which was the journey of a single soul-guided.

If you ever get the chance to view the painting up-close you may be able to see evidence of where the background was built upon layers and layers of washes and wet on wet touches. I knew that there had to be a transparent quality to the painting but also an opacity. It had to look as though at every point there was something beyond the surface. It had to suggest infinity -a cosmos repeating itself. It was because of this that the actual application of the paint took time. It was a build-up of layered tints and splashes of paint on the surface of the canvas while it was wet. This was then left to dry in the open air and natural light. It was important for me that the elements were also a part of the process. The concept of the unseen forces influencing destiny and direction had to be as much a part of the application as it was of the narrative of the painting. The wind, the rain, sunsets, sunrises, dust and night-time condensations all, at various stages, sheeted the surface of the work. I deliberately left the painting to dry after each session where the elements could interrupt the texture and composition; choosing to respond and build on the image they left me after they had done their work.

Each time I approached the canvas I imagined that it was an allegory for her spirit seeking pathways toward an enduring sanctuary. At other times the task was to limit my thoughts of her and her absence from overwhelming me; however, when I was before this canvas they were my guide.

I honestly cannot say how I felt when the painting was finally finished. I don’t remember. I know that even though it was from my own hands it brought me a sense of comfort and re-assurance when I looked at it. It never felt like it was from my hands and I like to think that truthfully, in some ways, it was not. I know that the elements formed it just as much as I did and that is important to me. For a long time I kept it to myself; hung in my studio for only my companionship. I imagined that it would stay in my life and I imagined that I would one day pass it on to one of my children as something significant to me…That wasn’t to be. Five years after I finished the painting and into my second year at UWI I found myself without the money to pay for tuition. Exams were upon me as well as the consequence of being barred from sitting them if the debt remained outstanding for another week. Unceremoniously, I packed the hummingbird along with two other pieces into my art case and made my way to campus to see if I could get them sold. 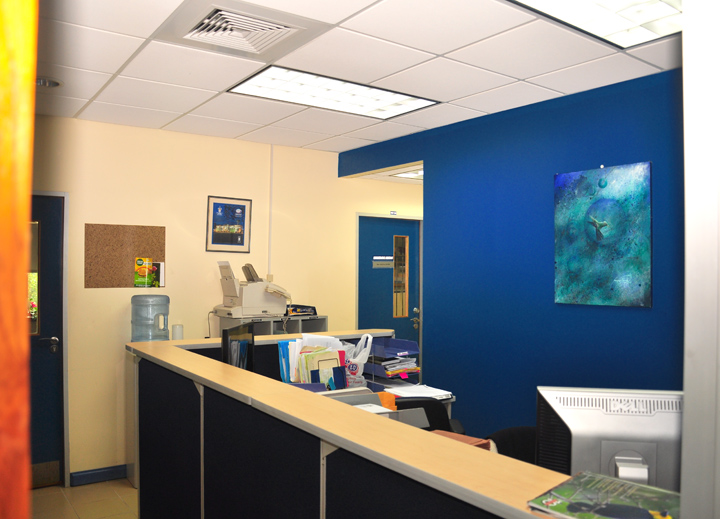 I take pride in knowing that it was Professor Ian Robertson, Dean of the faculty of Humanities who bought the hummingbird and I find even more solace in knowing that it was bought for the faculty office. We never met before the day I entered his office and asked him if he would like to “buy a piece of art?” I could only imagine what his initial thoughts were. In the end he bought the hummingbird and another piece (the other he kept for his private collection). Dean Robertson was a noble man and in conversations with him afterwards I had come to admire his resolve in the power of the arts to make transformative changes in the lives of individuals and communities. In one of those conversations he shared with me that he “wasn’t afraid to be poor”. He said “I’ve been poor before and I’ve risen from it and I’ve seen others who have worked and risen from it. I believe that this is the gift of the humanities to our communities-that with our own effort and a creative mind we can lift ourselves”. In spite of a strange guilt I’ve sometimes felt for taking the hummingbird down from my studio wall, the nobility of the man who eventually bought it made the sacrifice something with which I am at peace.

Sitting next to my father in conversation years after, he recalled the hummingbird. Robbed of all perception of light but still as lucid as a mountain spring he said to me “…You know what I always remember? That hummingbird you painted. Where is it now? Do you still have it?

“No pops, I sold it years ago… That is what kept me in UWI.”

“I would like to see that one again. That one was your best as far as I am concerned…to me eh…that one…I doh know, it just had something about it”

Not really knowing what to say or how to respond I asked him “what do you like about it so much?”

He thoughtfully gave back “I doh know boy…I don’t know…just something about it. You know I never told you this but that painting always reminds me of your mother…”

Nothing came from him for a while and then he asked “so where is it now?”

“Hanging in the faculty office at UWI. Since 2005”

“Do other people see it?”

“Yeah, alot…hundreds…it could easily have been a few thousand who have at least glimpsed at it already”

His eyes blinked slowly but I know he could see nothing other than what his imagination offered him. After a another pause, just as long as the first, he spoke with a distance and calm that made me uncomfortable to be in the room, almost as though I was interrupting another conversation. “That is good” he said.  “That is good…she was a beautiful woman.”

One thought on “THROUGH THE TURBULENCE AND CHAOS: GUIDED”